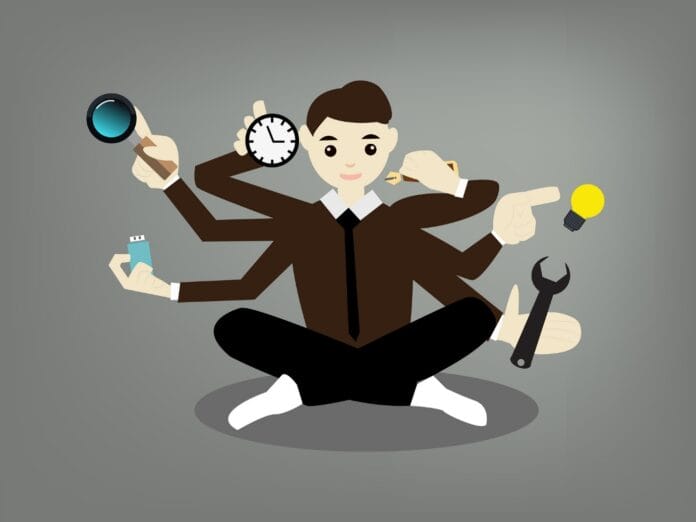 Some people pride themselves on being able to do several things at once, or “multitask.” – I can write an email while also listening to a podcast and glancing over at Facebook! Um… no you can’t. It might seem like you’re accomplishing many things at once but science begs to differ. And this also applies to people who begin one task, say writing a report at work, and then switch over to answering an email after hearing a ding or seeing a notification.

Task switching and multitasking are similar in that they require you to break your focus. Many years of research in the field of neuroscience show that the brain doesn’t do tasks simultaneously. Every time we think we are multitasking, what we’re actually doing is task-switching… and there’s a start-stop process going on in your brain. That start-stop process is really difficult for your poor brain.

It doesn’t save time and in fact, quite the opposite: it costs you time – even if that time is only microseconds. It saps energy and causes us to make mistakes. Among the biggest culprits that cause us to task-switch are digital distractions. You get a ping or a ding or a notification that someone has posted something or you’ve been emailed or you got a text message.

This requires you to switch your focus from the task you were previously working on and reorient your thought processes towards this interruption. As noted, this wreaks havoc on your brain and results in a tired, frustrated, unhappy person who is less effective and efficient.

And so, the race has been on for a while now to find ways to focus and stay focused. It’s not as easy as it might sound. You can’t just tell yourself to “focus!!” We need help. And millions of people are discovering that one of the best ways of getting such help is web blocking, which is done by downloading a blocking app.

A blocking app works simply and effectively. As the title suggests, it blocks websites, messages, or other distractions according to the parameters you set up after you download it and have it sync across all your devices. If you’ve got an important report to write and you need to focus for a couple of hours on Monday morning, for example, you can set up the blocking app to completely block for that time the entire internet, or perhaps only block email, social media, or whatever the digital distraction is that generally proves to be a hurdle to you getting something done.

Students and workers of all kinds are using blocking apps to help them get stuff done, and they are proving effective tools for two main reasons. One: because you made the choice to download the app and set up the times when you don’t want to be disturbed, or you don’t want to be able to access certain sites, you have ‘taken control of the narrative,’ so to speak… and this positive reinforcement is a strong motivator.

Two: it takes the willpower element out of the equation. You don’t have to berate yourself for slipping over to a sports site or a news site or a social media post, as those sites are blocked and if you try to access them a little message will pop up saying, “Sorry! This site is blocked! Get back to work!” Usually, that’s all it takes for you to remember that you’ve made a commitment to focus.

Despite all the research that shows multitasking is inefficient, there persists a cultural myth that intelligent people can juggle more than one ball at a time. Of course, sometimes you have no choice. Let’s say you’re a mom with a young kid who’s also got a business. You may have no choice but to feed your child while also looking over an order or business email. But for those who do have a choice, task switching should be avoided like the proverbial plague.

Psychology Today offers a great experiment for those who have a hard time accepting that task switching is detrimental to efficiency. Have someone time you as you first write out the line, “I am a great multitasker.” On a second line write out the numbers 1 to 20 sequentially. This usually takes most people roughly 20 seconds.

If you, do it again in multitasking mode and one write letter of the sentence, “I am a great multitasker” followed by one number of the 1 to 20 orders, you will find that it takes significantly more time than 20 seconds and you may well have made an error or two. This is because, during task switching, you must rethink what the next letter should be or what the next number should be. If you were focusing on simply writing the sentence, “I’m a great multitasker” or writing out 1 to 20 – you’d be able to get the task accomplished with less energy.

Blocking digital distractions (and using a blocking app is a great way to do so) provides a major boost to reducing task switching, as you are forced to stick to the single project that you hope to accomplish. The app syncs across all your devices so you can’t take a bathroom break and ‘cheat’ on your phone. Your mind remains engaged on the subject at hand – which is really the only way great ideas and great work can be accomplished. You need all your brainpower for a single task that requires creativity, or learning. Don’t deceive yourself and waste valuable hours of your day in a parody of productivity. Instead, block out distractions and get real results.

The Nightmare Before Christmas Sequel: Will There Be Another Sequel?

Will There Be Super Crooks Season 2?